Full Day One in the Diocese of Seoul

It is always life-giving and eye opening to be back in the Province of Korea, and today was no exception. 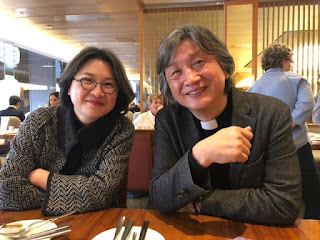 Breakfast with the Reverend Peter Jun-Gi Choi, Provincial Secretary, and the Rev. Kyrie Kim, former Interim Provincial Secretary who is transitioning to work in New York with Trinity Wall Street. I met Kyrie on my first trip to Korea in 2011 and am grateful for the many times I have been able to visit with her on my trips to Korea. We talked about changing demographics in the US and the need for culturally competent clergy as well as the challenges of this work. We also talked about the work of the Provincial Secretary. 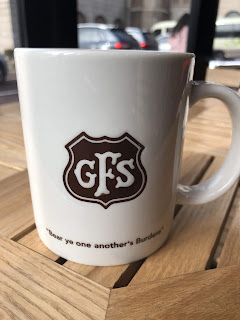 No trip to Seoul is complete without a stop at Grace Cafe for hot citron tea! Cafe Grace — a ministry of the Women’s Mission for the Province of Korea. This ministry was started by the Girls Friendly Society, if memory (and my cup!) serves. It was designed to help women who have come from North Korea  as refugees build skills and new lives. I remember meeting with the GFS group in the old cathedral office building in 2011 — where they introduced me to Cafe Grace. Turns out my next trip of the day was to the Women’s Mission Center — the women who, through GFS developed Cafe Grace. You can read about it here:
http://www.koreanmission.org/projects.html 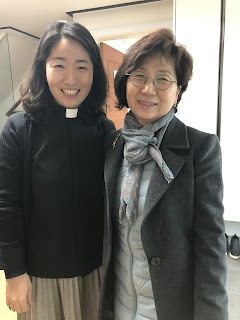 We were taken over to the Women’s Mission Center just a few kilometer’s away from the Cathedral. This Women’s center was opened in 2016. This project began in 1993 when Ruth YangSoon Choi started the committee. In 1995 the committee organized to fundraisers for the money to build the center. The Women’s Mission Center is the headquarters of women’s ministry for the Province. Their focus is on education and leadership for women. Also there are educational opportunities for couples. They are expanding to work with all ages from teenagers thru retired women.  The Center advocates for  gender equality and gender justice, especially among women who are most vulnerable to injustice and inequality. The Rev. Hannah Hahn is the Chaplain and Program Director. Ruth YangSoon Choi is the Executive Director. The Center also offers opportunities for retreats and programming for women. 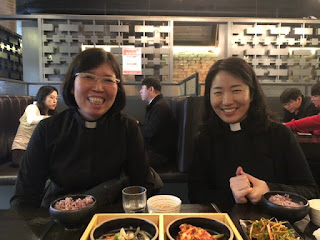 As has been my custom since my first trip to Korea, I spend time with the women clergy. In the Diocese of Seoul (and actually throughout the Province), because this is the week of “switches” — where clergy are moved from one position to another, those being moved to different posts were in the process of moving — literally. They finished wherever they were formerly deployed last Sunday and this Sunday they start in a new location. This often requires a physical move! I was able to have lunch with Hannah (who isn’t being switched!) and Elizabeth WooWhee Nahm who finished serving at St. Francis — a church which has a strong ministry to migrant workers (I had the privilege of visiting that parish and talking with some of the migrant workers on one of my earlier trips to the Province of Korea). Elizabeth will begin working at the Church of Korea Publishing Company.
Before she became a priest Elizabeth was a book editor. It was a joy to speak with the two of them, catch up with what they are up to, and to talk about the challenges of being a woman priest.

After a short rest we met with the Rt. Rev. Peter Lee, Bishop of Seoul, and the Dean of the Cathedral, Joseph Joo. We spent time talking about challenges of ministry in the Diocese of Seoul. There are 60 churches in the diocese, which keeps the Bishop busy. The Cathedral congregation is growing, with a larger number of young people attending. The Bishop was very thankful for the program we have offered in terms of training of clergy in Clinical Pastoral Education — it has born fruit in the Diocese of Seoul. After our meeting we went and had dinner together, and of course I forgot to take a photo of us all together! Ugh.

Older Post Home
Subscribe to: Post Comments (Atom)
Hi! I'm glad you're here! Come on in, pull up a chair, and see where my travels have been taking me.

This blog is designed to lift up and honor the people and congregations in the Diocese of Los Angeles that are assigned to my areas of responsibility or to whom I go for formal visitations. It is not designed as a vehicle to take political or theological stands.

I am grateful to the Rev. Dr. Elizabeth Kaeton for the following language regarding use of materials from this blog:

If you wish to reproduce anything written here or link to another site, you may only do so with the express permission of the author, and only with appropriate attribution.